Recently returned from a manta ray research expedition with Conservation International’s team in Raja Ampat, Indonesia, guest blogger Shawn Heinrichs shares his experience — and a few of his stunning photos — with Human Nature.

Raja Ampat is considered by many to be the crown jewel of the Coral Triangle, the very epicenter of global marine biodiversity. It’s also home to one of the most charismatic and graceful of marine creatures: the manta ray. 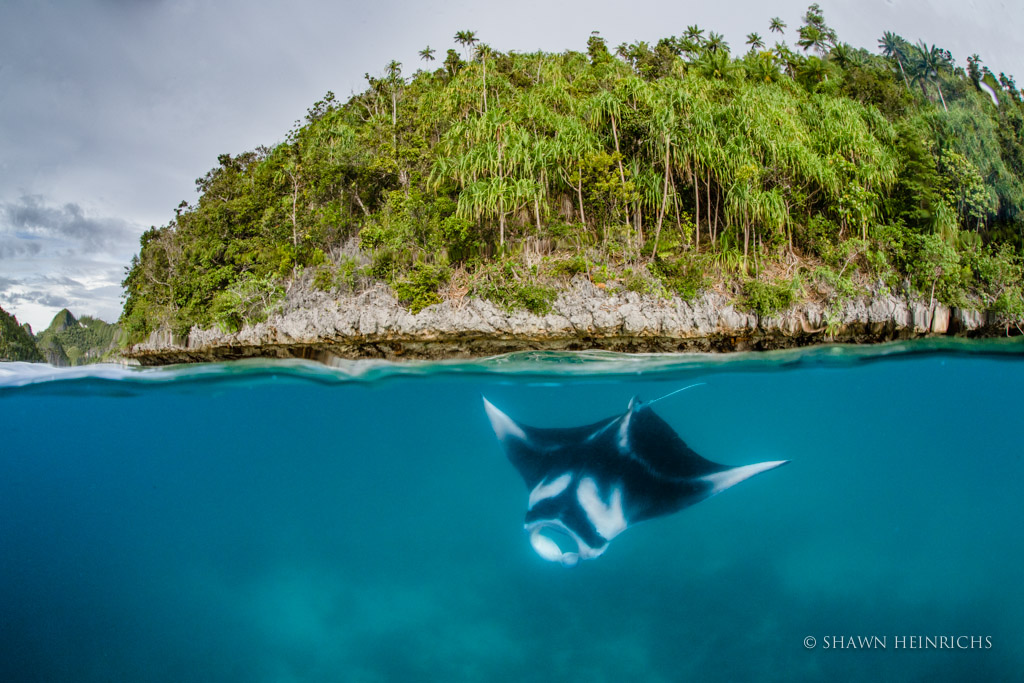 Ever since my first encounter with a manta ray a decade ago, I have been captivated by the gentle, curious and intelligent nature of these ocean giants. Upon discovering they were under severe threat from exploitation for their gills, I made it my life’s mission to secure global protection for these vulnerable creatures. Given that Indonesia is one of the top manta tourism destinations on Earth, this expedition took on particular significance for me.

Although both species of manta are classified as Vulnerable by the IUCN Red List of Threatened Species, manta rays are still abundant in the waters of Raja Ampat, largely due to progressive conservation measures enacted by the local government. In November 2010, Bupati Drs Marcus Wanma, the regent of Raja Ampat, made a historic declaration, designating the entire 46,000 square kilometers (17,760 square miles) of Raja Ampat a sanctuary for sharks, manta rays, mobula rays, dugongs and turtles.

This sanctuary, formally ratified into law in February 2013, was the first of its kind in Indonesia. As such, manta rays now swim safely in these waters, free from exploitation by the gill raker trade that has severely depleted manta populations throughout much of the region. The trade in ray gill rakers — mainly for use in traditional Chinese medicine and nutritional supplements — has expanded as high-value fins have grown scarce due to plummeting of global shark populations. 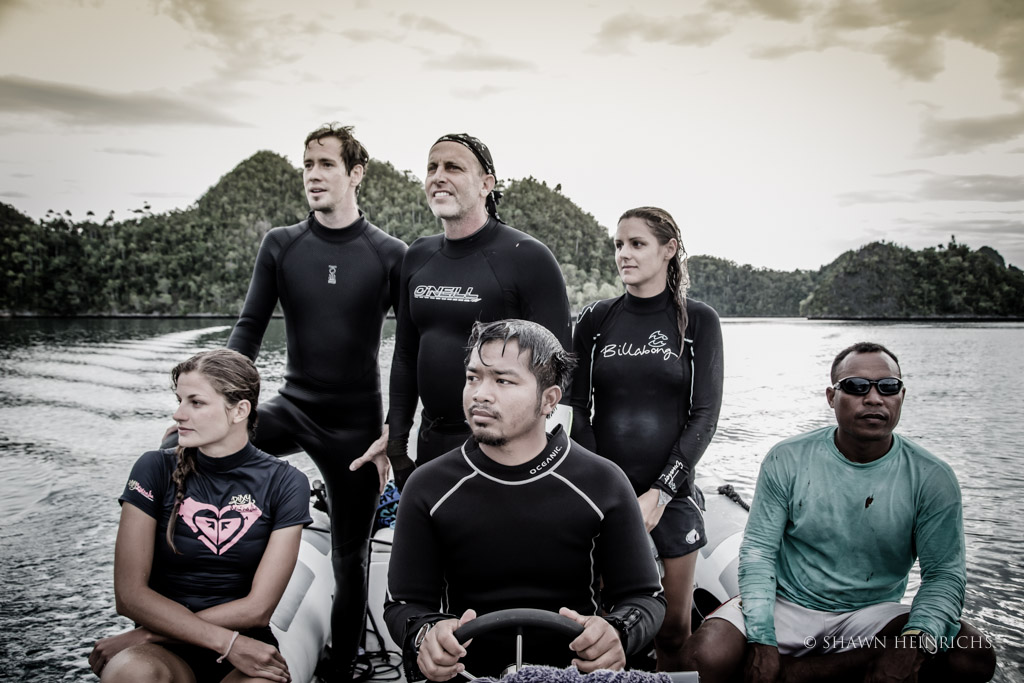 Our team included members from an exciting collection of conservation focused organizations: 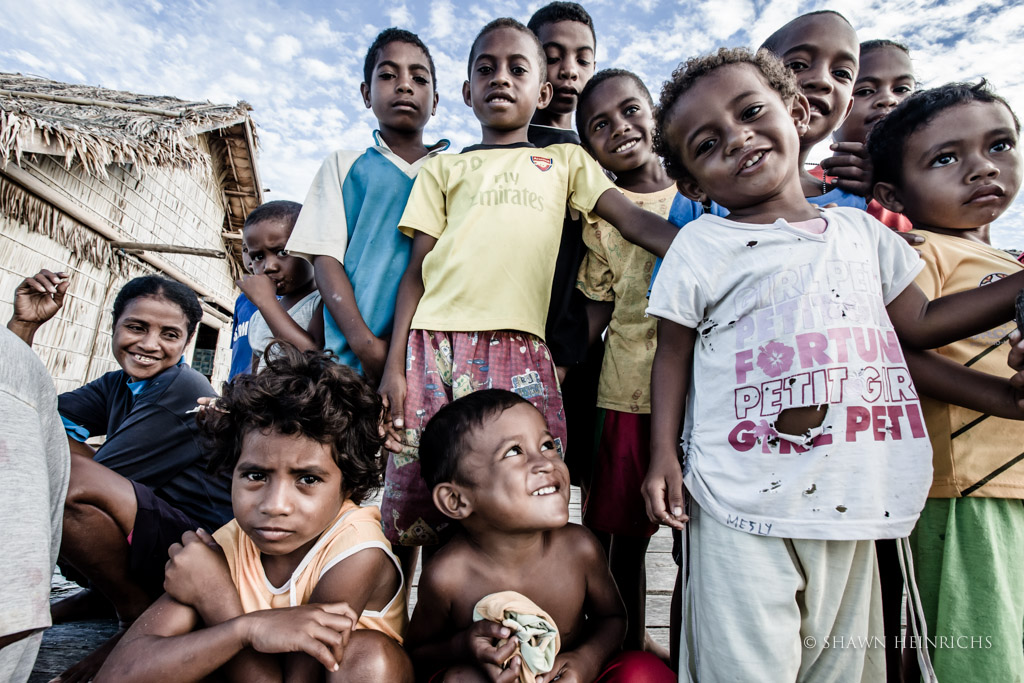 There is still so much we don’t know about mantas — their daily and seasonal movements, population sizes and dynamics, where they reproduce and how tourism impacts their behavior. Ultimately, all this work will translate into a much better understanding of this manta population, providing critical information to facilitate better-managed manta tourism in Raja Ampat, and present greater opportunities for local communities to participate and benefit from this tourism. 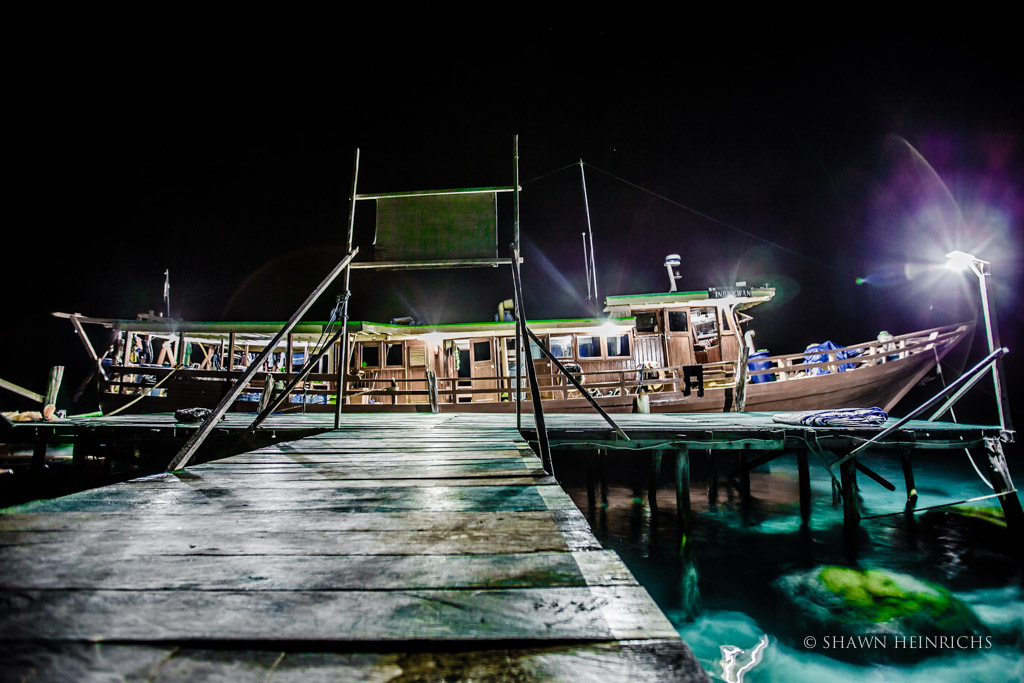 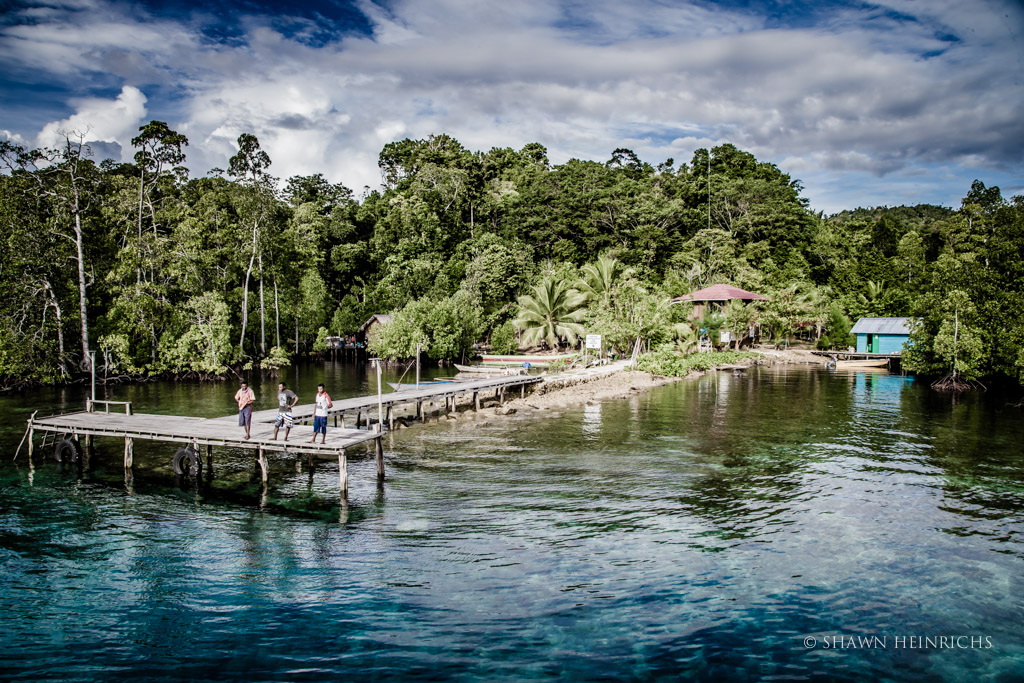 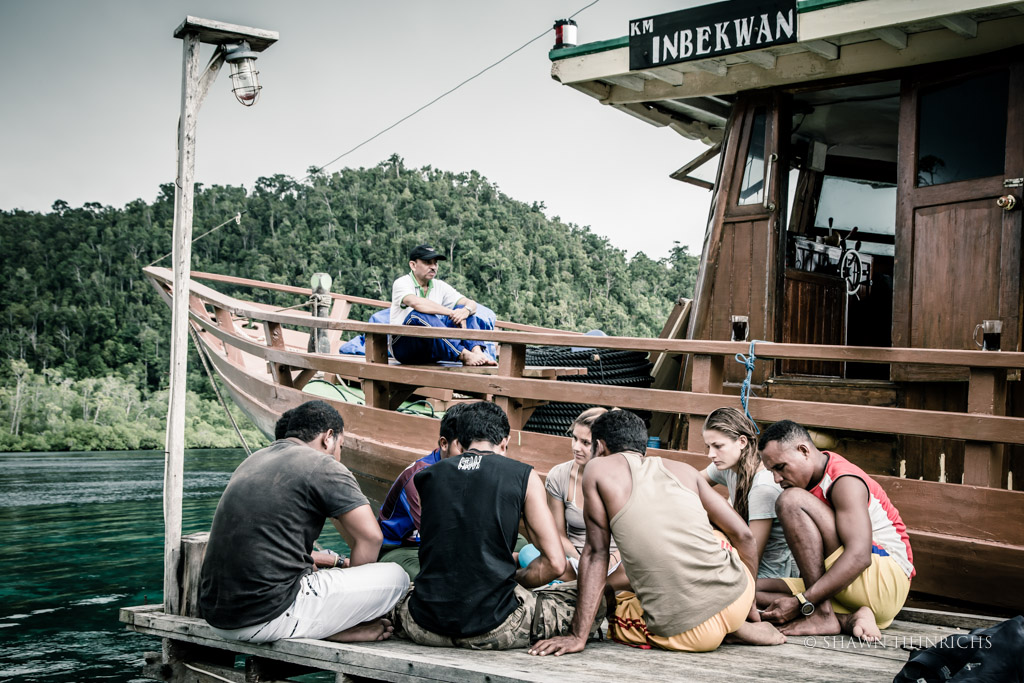 Our team met up in Sorong in West Papua and boarded the Inbekwan, the CI research vessel that would be our home for the next 10 days. We departed late in the evening, crossing the Dampier Strait and arriving at the Gam field station early the next morning. We spent the first part of the morning training the local team about the process of monitoring and documenting manta tourism and how to capture manta IDs. The monitoring process requires staff to be stationed at popular manta dive sites, collecting data on number of divers, operator details, duration of dives and number of mantas observed during divers. Manta IDs are gathered by capturing a photograph of the animals’ belly; every manta ray has a unique spot pattern. 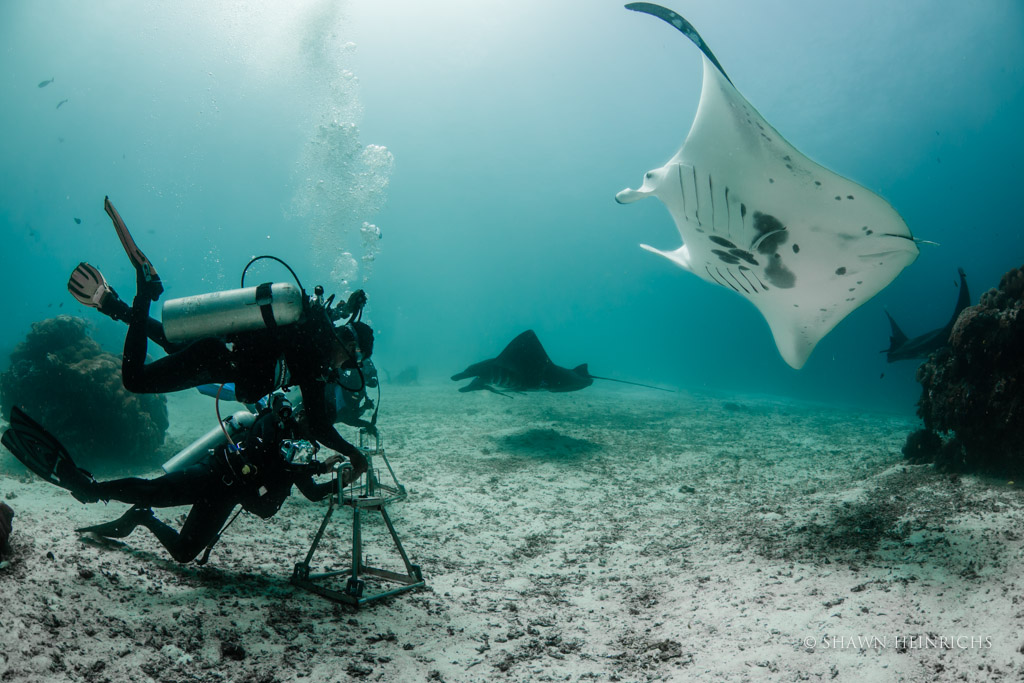 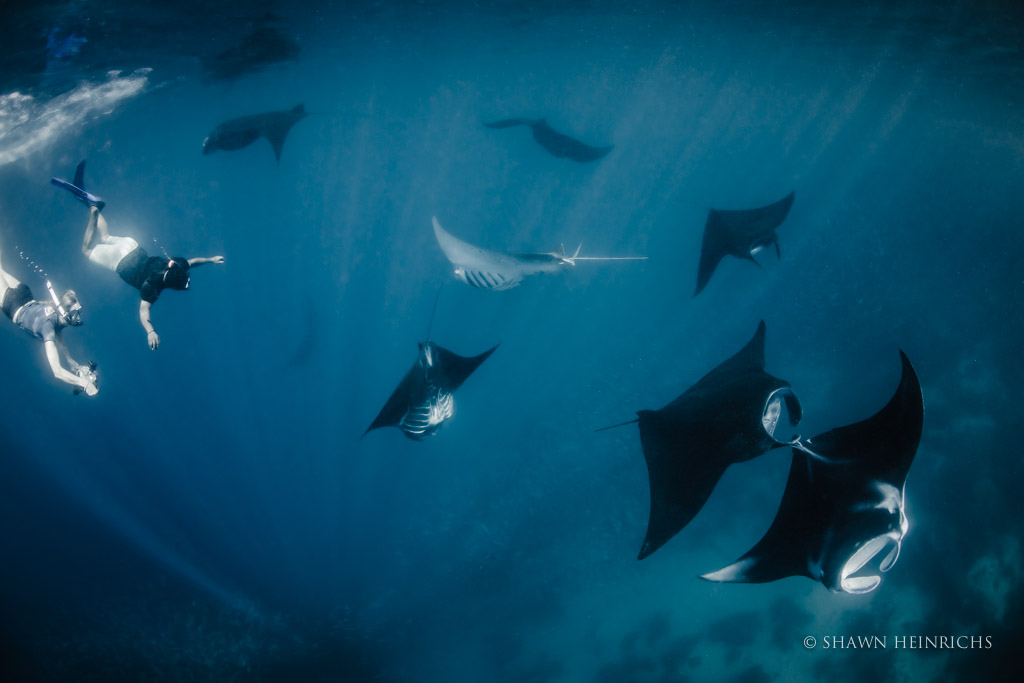 The next two days were spent diving and monitoring the nearby waters. We were blessed to swim with dozens of feeding mantas working along the surface currents. Our team collected lots of ID shots while also enjoying phenomenal interactions with these mantas as they twirled and danced all around us. 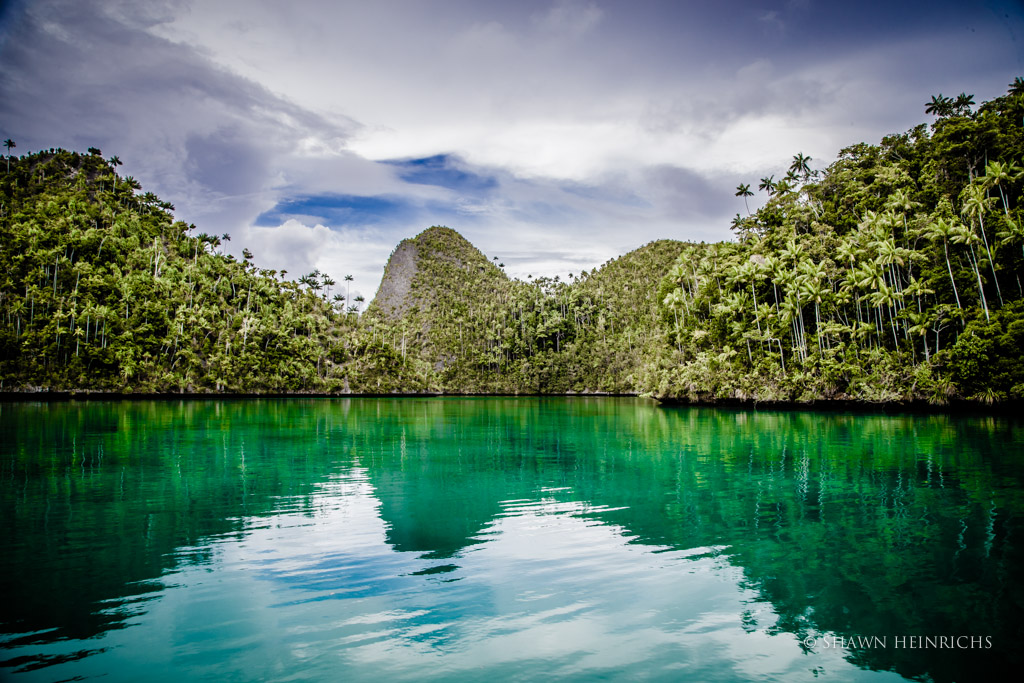 Later that night, after an exhaustive session assembling acoustic monitoring equipment, the Ibekwan motored north to the famous and profoundly scenic Wayag Bay.

Words cannot come close to describing the spectacular beauty of this island chain. Islets jut directly from the sea like ancient fortresses or “beehives,” every square inch clothed with a canopy of lush vegetation, palms and tropical hardwoods.

Beneath the cliffs, these sheltered waters act as a perfect nursery for all kinds of pelagic marine life. Sadly, in the past this fact was not lost upon outside exploitative fishers, with the bay beset by gill nets targeting sharks and rays. Fortunately in 2007, CI secured a commitment from the local communities with control over these waters to designate the entire area as a no-take zone, establishing a team of rangers and abating the threat to the bay. 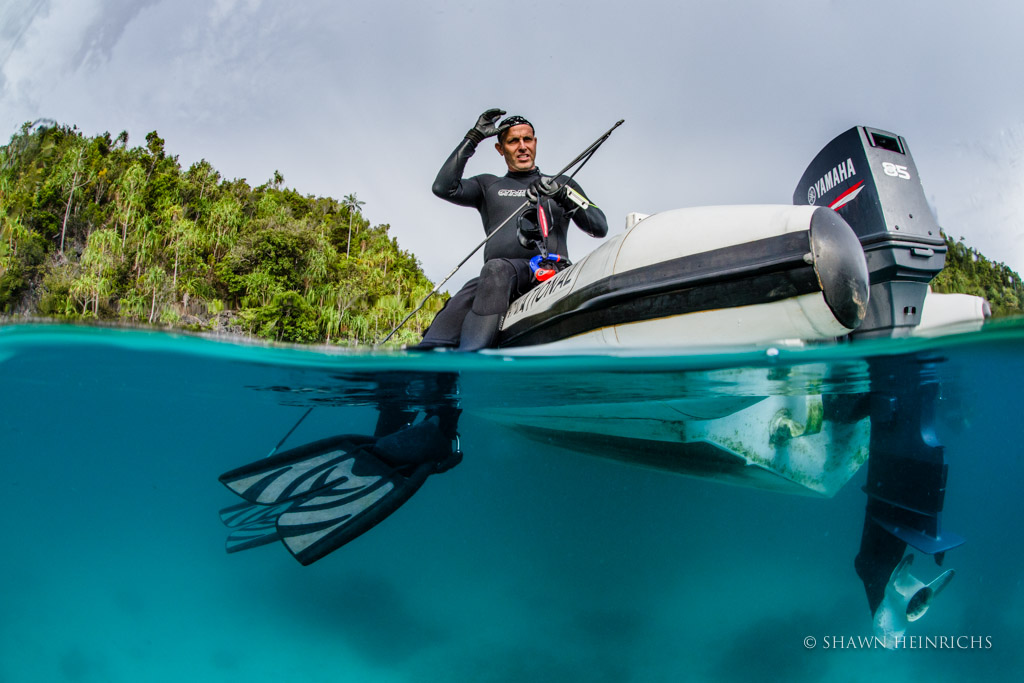 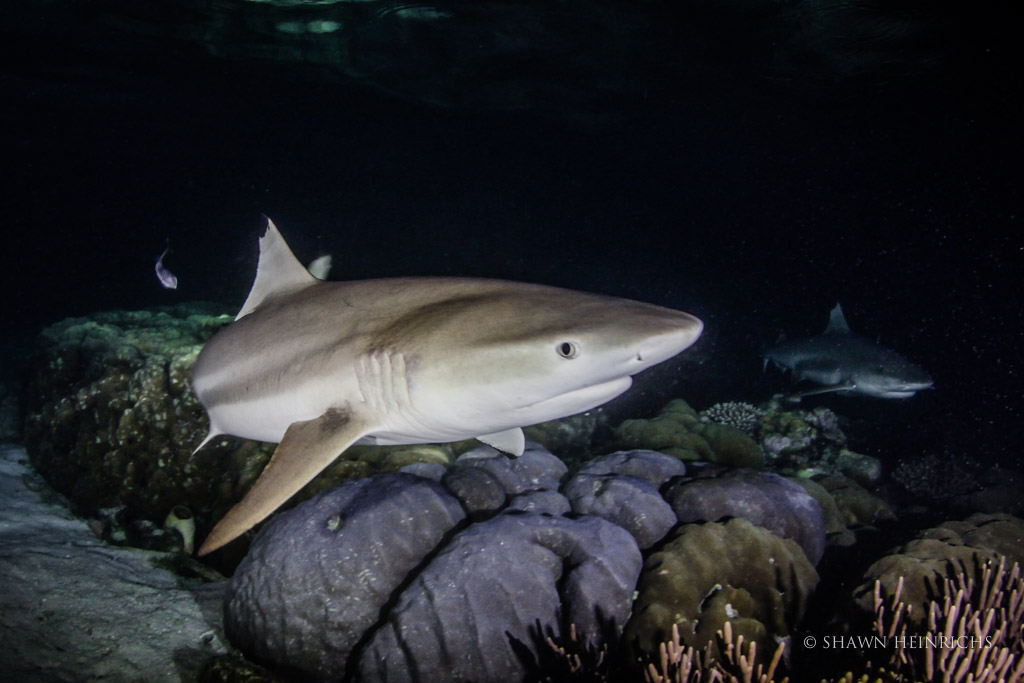 Since that time, the area has demonstrated remarkable resilience. Sharks once again patrol the reefs, and mantas glide gently through the bay’s calm waters. Our team was treated to heartwarming encounters with baby manta rays in the bay and an evening swim with young blacktip reef sharks hunting in the shallows. For me, interacting with a baby manta, watching it struggle to swim more efficiently and learn to feed, created memories that I will cherish forever. It was near this site that we also successfully deployed our first acoustic tag and installed our first acoustic receiver. 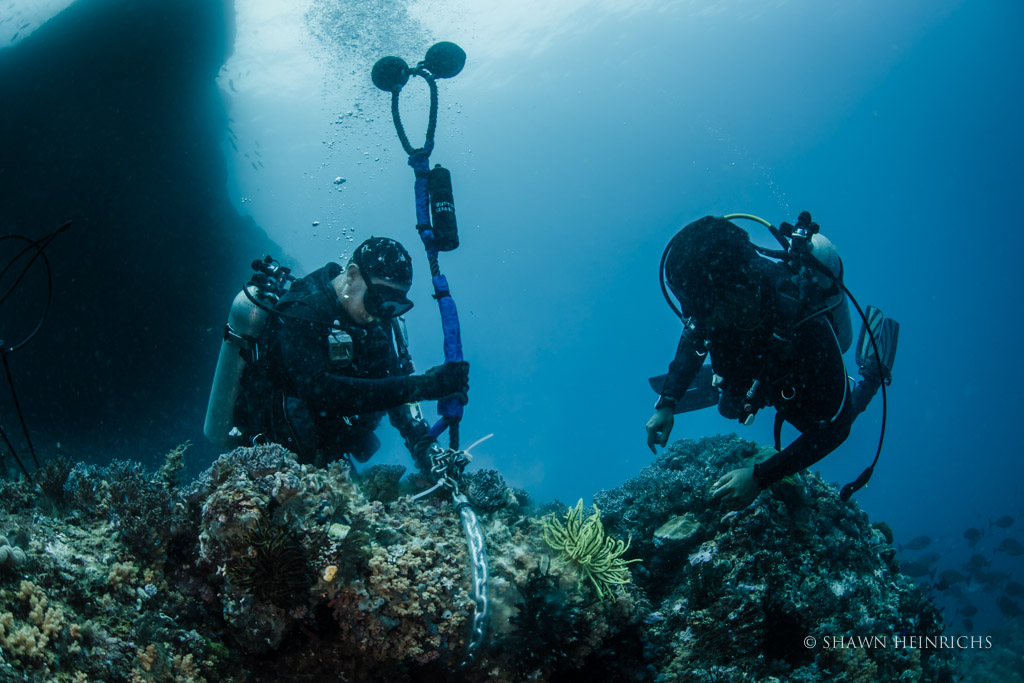 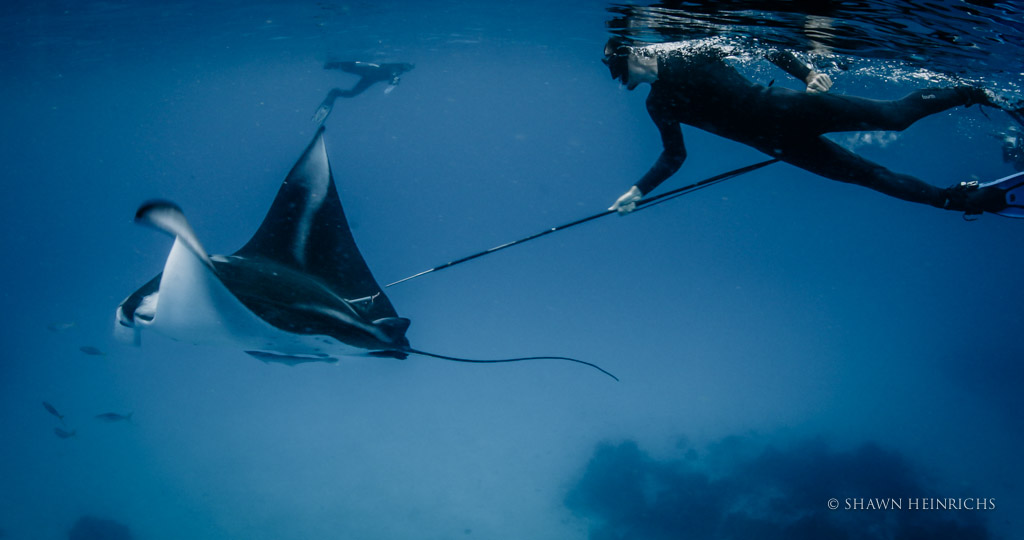 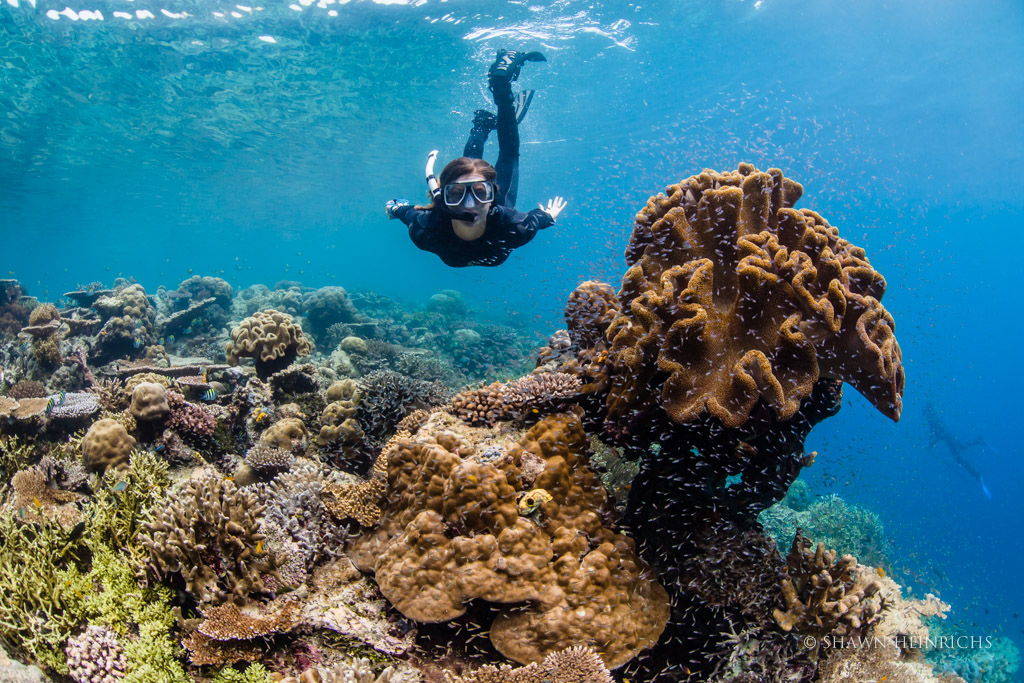 Our journey continued on to Uranie and the Button Islands, where we installed two more acoustic monitoring stations. We then moved on to Eagle Rocks, where we found groups of mantas feeding in plankton-rich waters. After deploying several more acoustic tags, and sustaining some very uncomfortable jellyfish stings that left most of us with red-spotted hands, faces and necks, we decided to head to Jef Nabi to investigate rumors of mantas feeding at the surface. Though not in the numbers we had hoped for, we did find mantas and were able to deploy more tags. 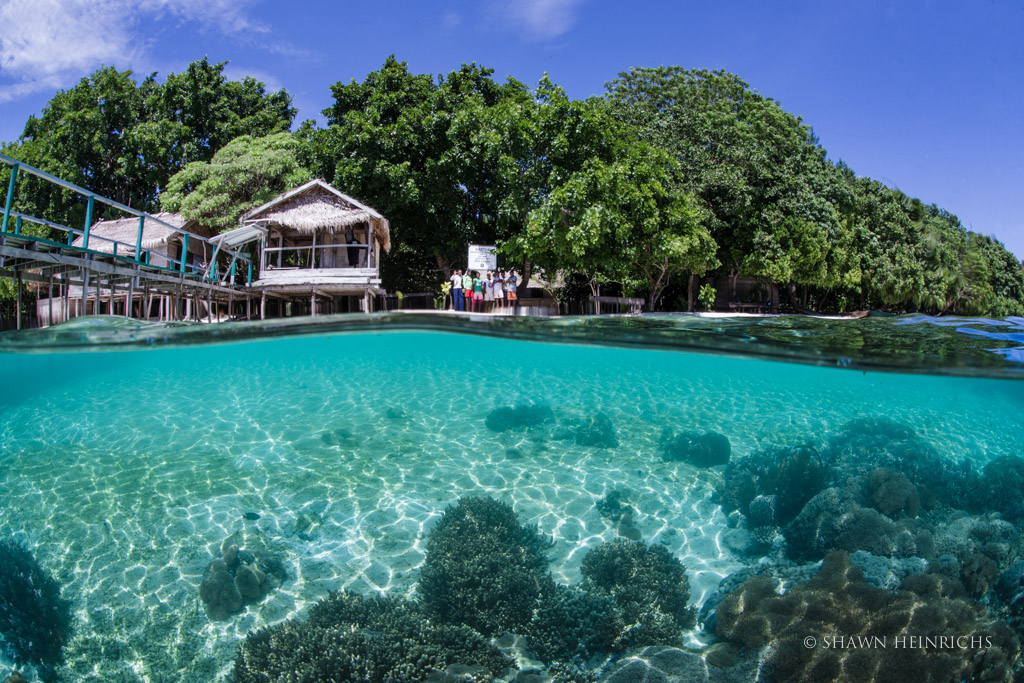 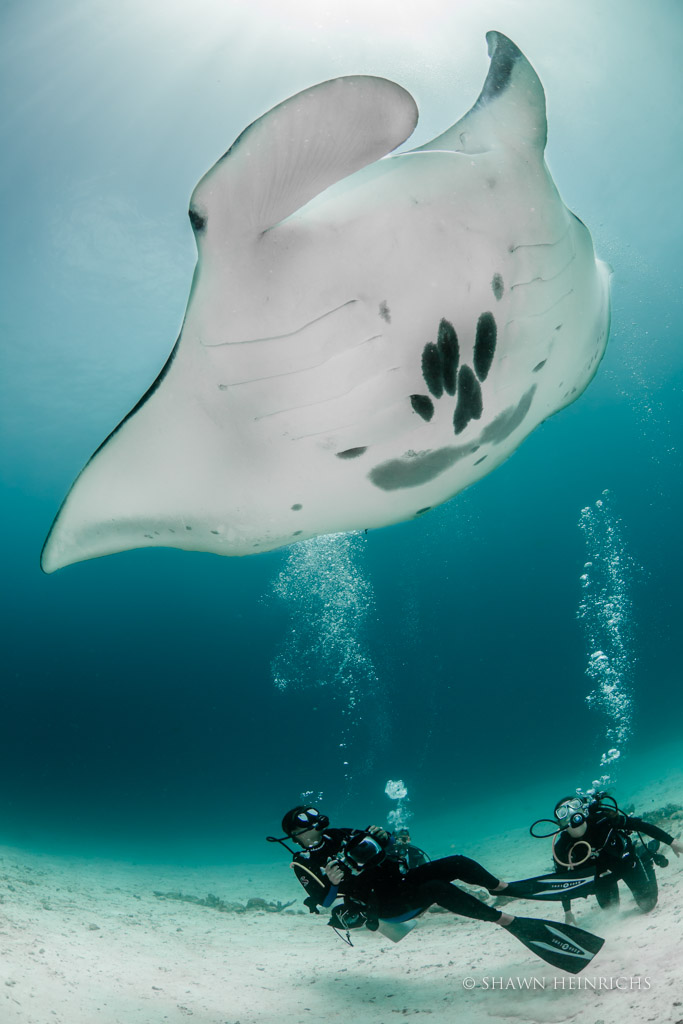 We reunited with our local monitoring team at the Gam field station, shared data and spent the rest of the day deploying more tags and installing a monitoring station. We made a late day visit to the Dayan field station, spending the night before heading back to Gam for our final day of work. After a successful morning of tagging, we called it a wrap and the Inbekwan began the journey back to Sorong. 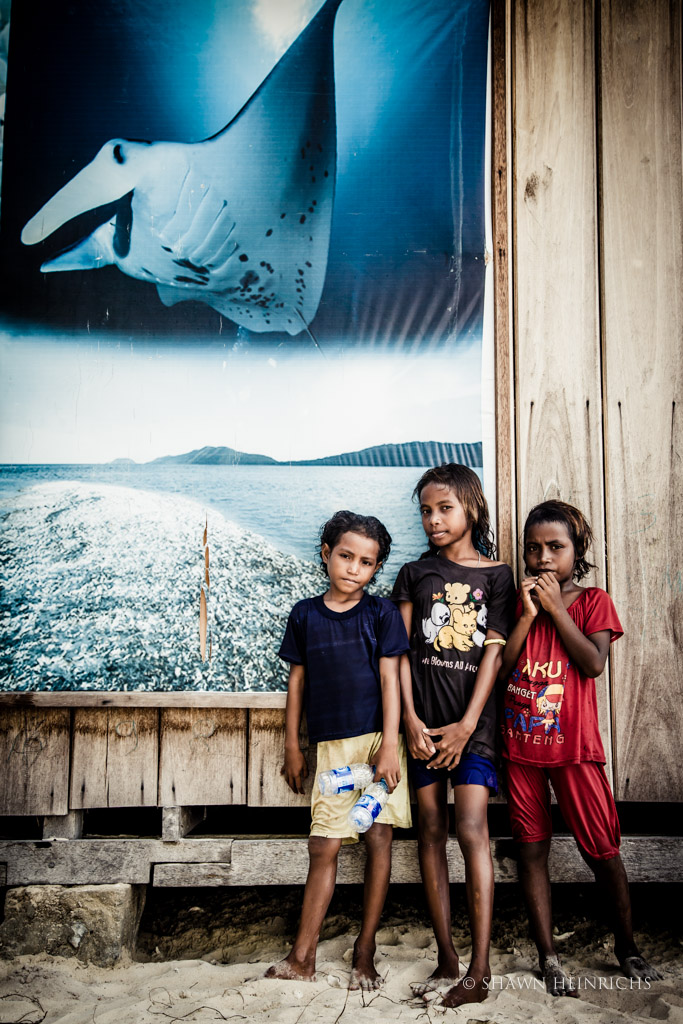 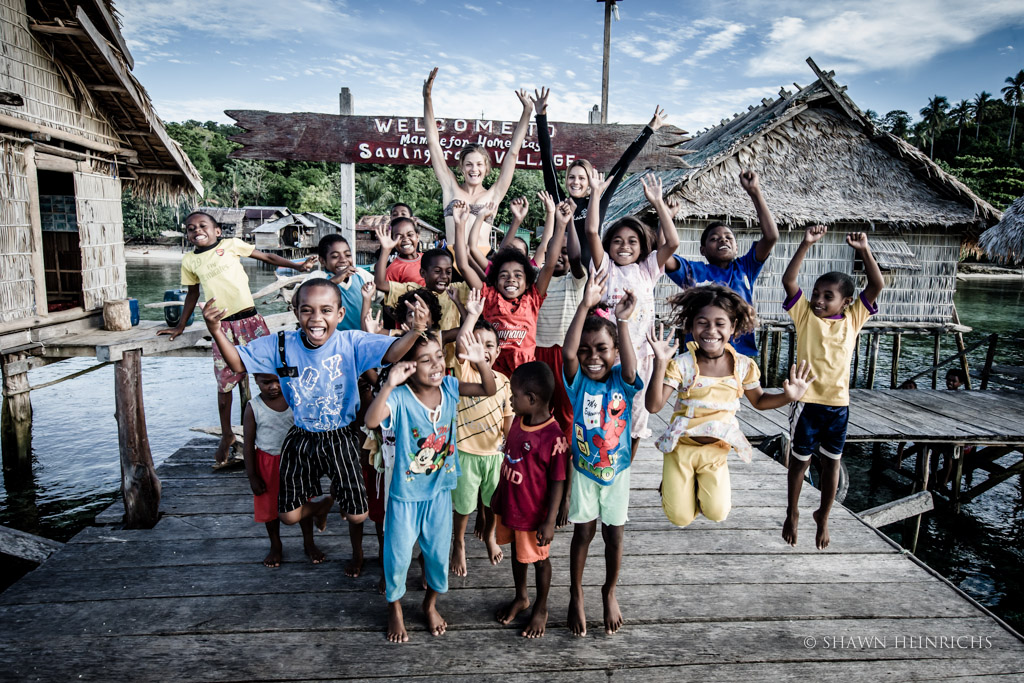 For me, this expedition served as an inspirational reminder of how much we can accomplish through our collective conservation efforts. Indeed, the work of CI and partners in Raja Ampat — which has helped show dramatically how much more mantas are worth to local economies alive than dead — has been a primary driver in spurring the Ministry of Marine Affairs and Fisheries to develop a national level regulation to provide blanket protection to all manta populations across Indonesia.

We are optimistic this regulation will be signed by the minister before the end of this year — thus providing a monumental Christmas present to mantas, local coastal communities and manta enthusiasts all over the world.

Shawn Heinrichs is an Emmy Award-winning cinematographer, photographer and marine conservationist. An independent filmmaker, he is the founder of Blue Sphere Media, a production company specializing in underwater, adventure and conservation media. In addition to CI, he is a frequent partner with WildAid, Manta Trust, Shark Savers and Pew Environment Group.