You are here: Home > Orcas vs Sperm Whales

I just returned from an epic expedition to Sri Lanka where our team spent 9 days at sea in search of  Blue Whales. Accompanying me was my expedition partner Paul Hilton, my brother Brett, and close friends Douglas Seifert, Phil Sokol and Michael Umbscheiden. Together we battled rough seas, burning sun, cramped boat conditions and long days searching endless seas. Though not so successful with Blue Whales, what we did achieve was beyond anything any of us could have imagined, as we documented a world first underwater! This is our story! 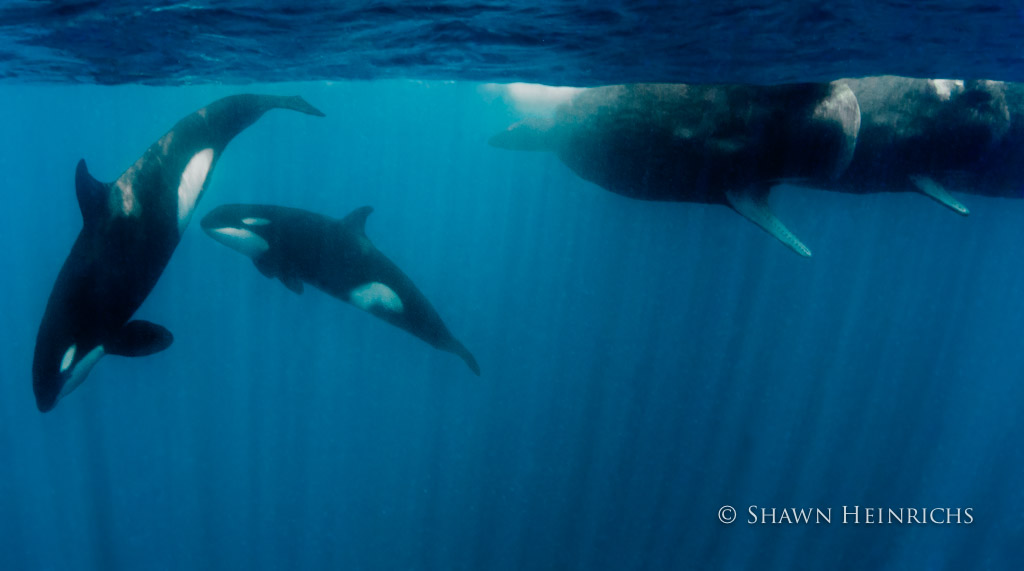 Armed with my trusted Canon 1Dx in Nauticam Housing, and GoPro 3 with Flip3 Filter, all supplied by my trusted partner Backscatter in Monterey, I had everything I needed to capture full frame images at blazing fast speeds and also capture full HD video!

All eyes were fixed on the horizon as we converged on the melee of violent splashing on the oceans surface just ahead. After 8 days with little success searching along the coast of Sri Lanka for the elusive Blue Whales, it was a relief to finally find something. At first we couldn’t figure out what this commotion was all about, but as we drew closer it quickly came into focus. 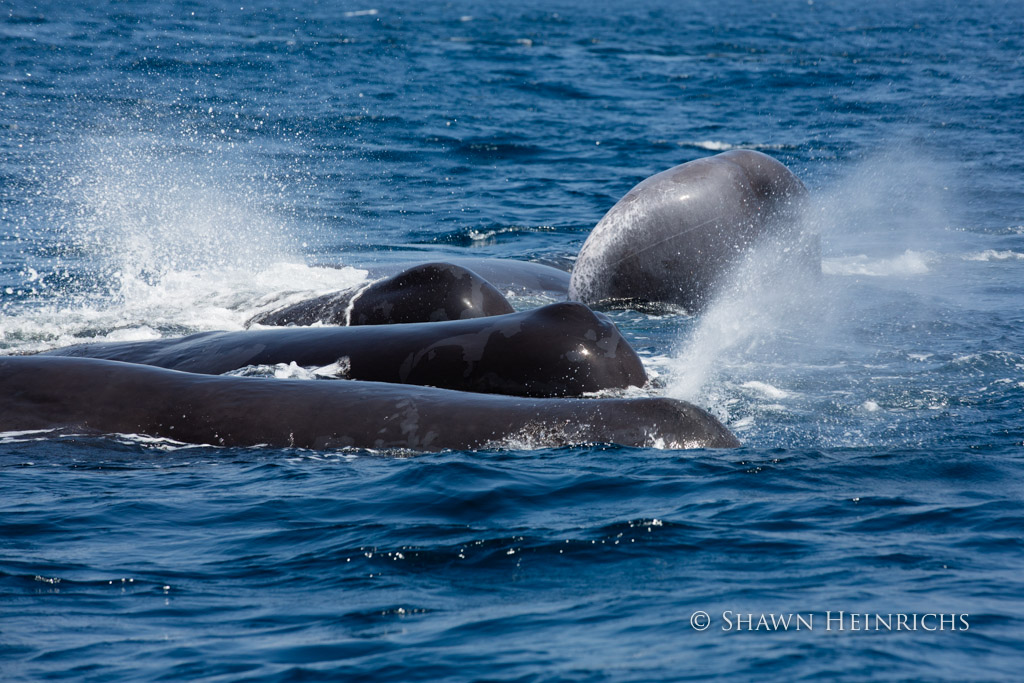 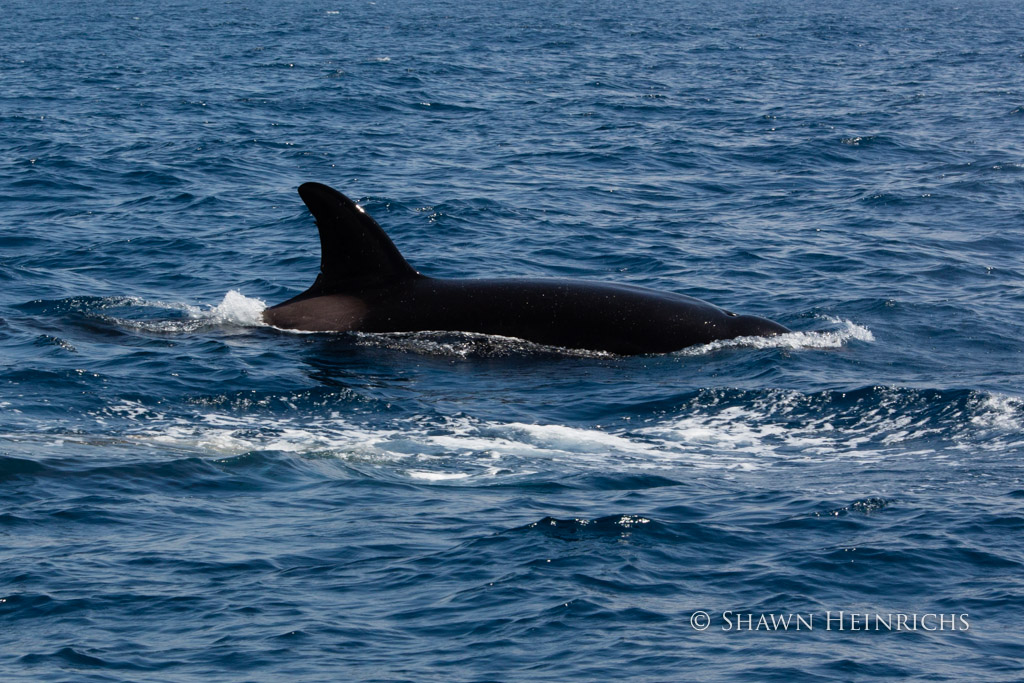 A huge dorsal fin cut the surface and charged into a log jam of rolling long dark shapes. Almost in unison we shouted ‘Orcas attacking Sperm Whales’! In all my years on the ocean, I had never heard of such a thing and certainly never imagined I would see it with own eyes. We grabbed cameras and fired away as a pod of perhaps 5 Orcas tore into a family of a half a dozen Sperm Whales, right next to our boat! The attack was violent and disturbing as the panicked Sperm Whales were clearly no match for speed and maneuverability of the orcas. 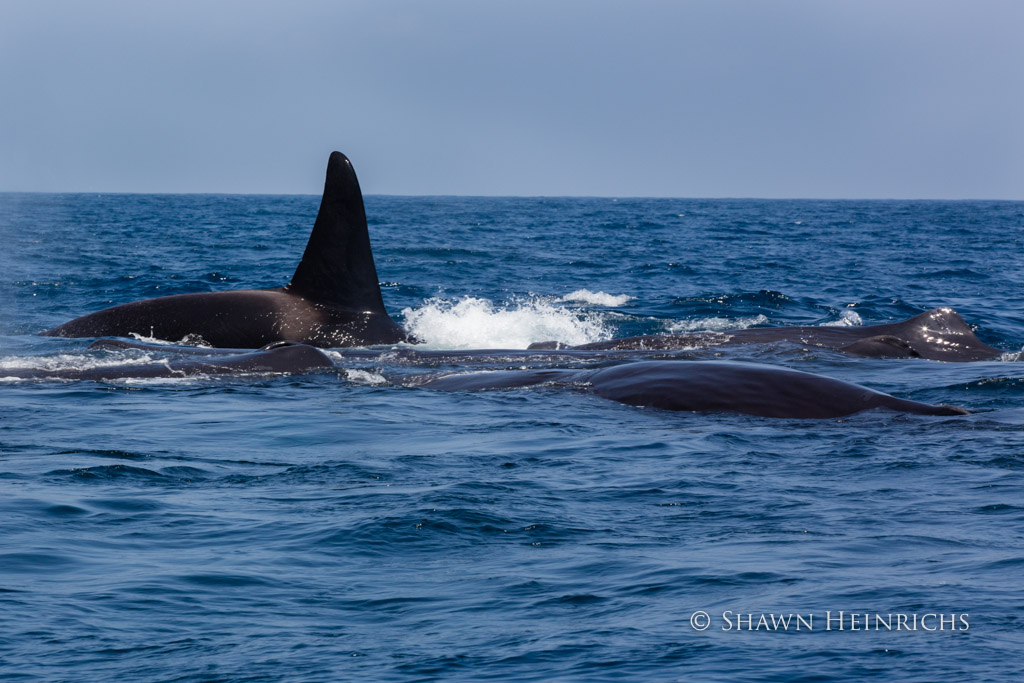 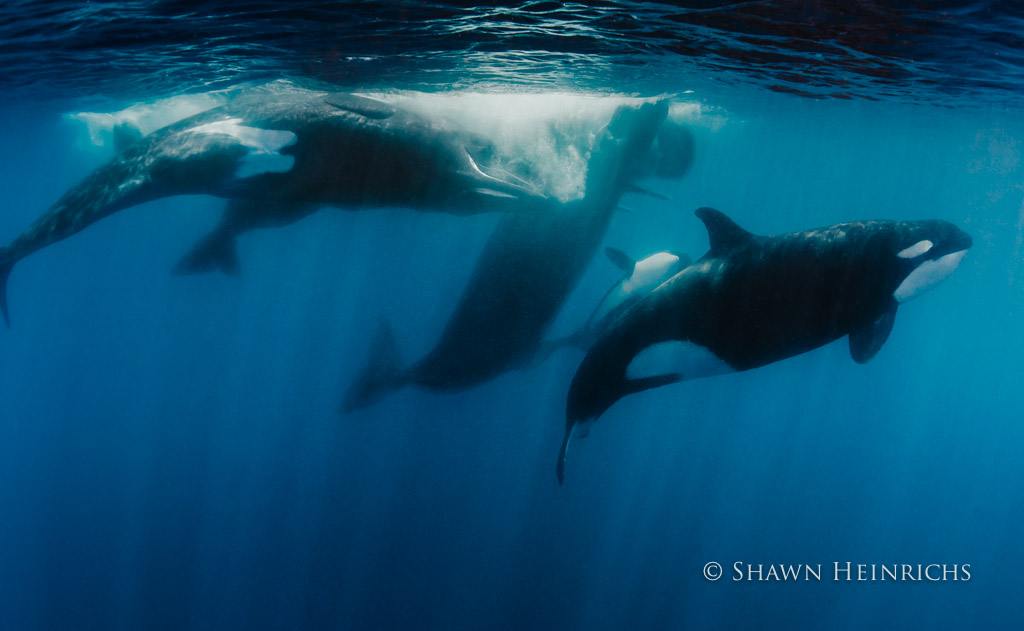 I realized this was a once in a life time opportunity and summoned up the courage to jump in the water and join the frenzy. All eyes fixed on me wondering if I would become easy prey for the most formidable predators in the ocean. Wasting no time, I grabbed my camera and slid off the back of the boat. There was a frothing, dark pile of shapes ahead of me. Drifting away from the boat toward the action, I took note as the largest Orca in the pod broke off and made a bee-line for me, pinging me with its sonar. Time slowed down as my mind battled with my intuition. I had heard warnings before about the extreme dangers of swimming with ‘wild’ Orcas, especially when these apex predators are engaged in a hunt. But in my heart I knew they were highly intelligent and evolved creatures who ‘should’ have no interest in hurting me. As it approached, I thought to myself, ‘well I am about to find out the answer’. 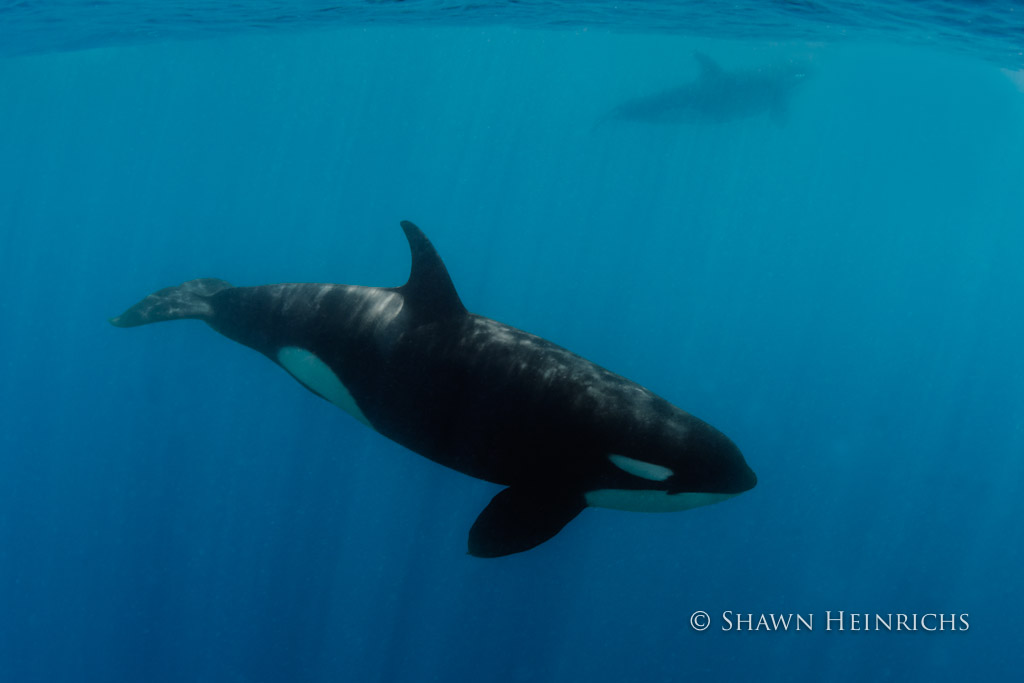 The Orca came right to me then veered off at the last moment, drifting down into the deep blue below me. I spun around just in case another oOrca might be sneaking up behind me but there was nothing. I watched the Orcas return to the hunt and the battle continued. But it we difficult to keep up and I returned to boat as the Sperm Whales attempted to retreat from the Orcas. On the surface, we gasped as the assault suddenly turned into a frenzy. The Orcas appeared to separate one of the juveniles from the rest of the group and they set upon in a fury. Dorsal fins sliced the surface on all sides, bodies rolled, and huge tails violently crashed down, as the sea turned to a frothing, churning mess. 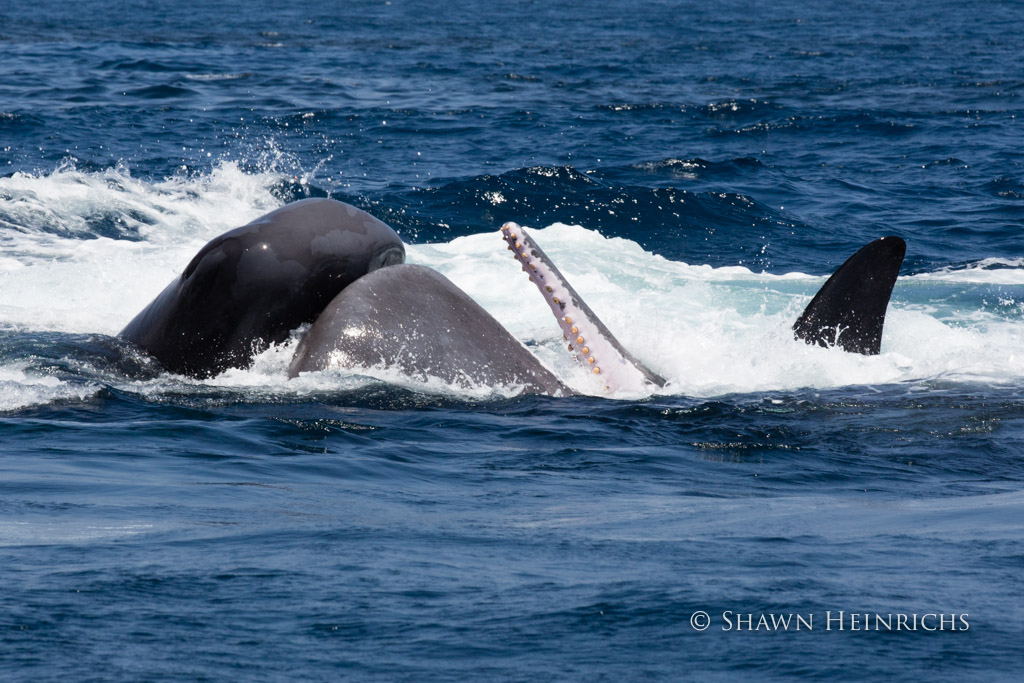 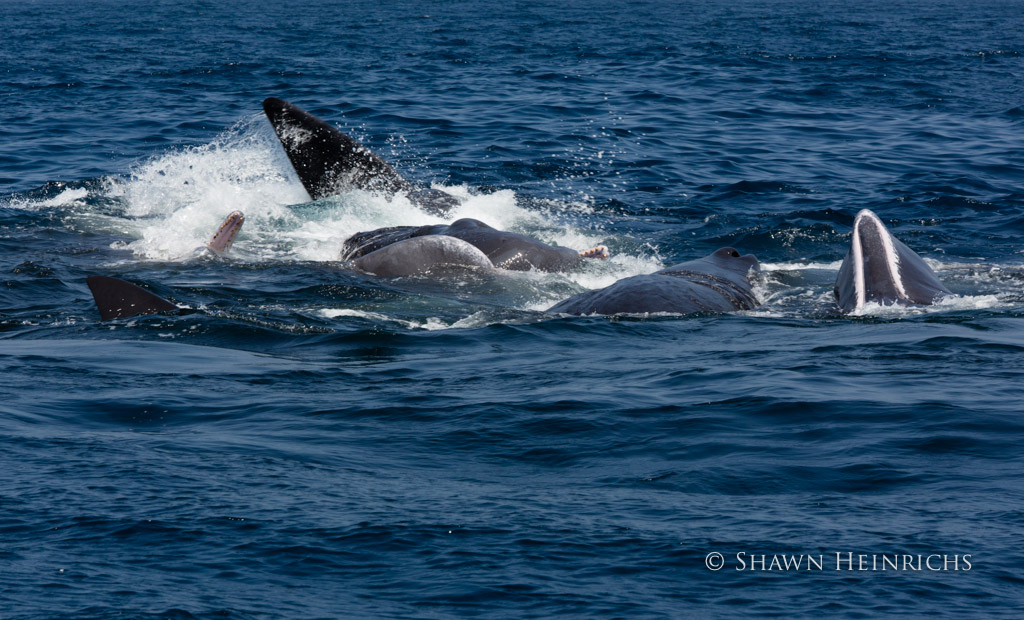 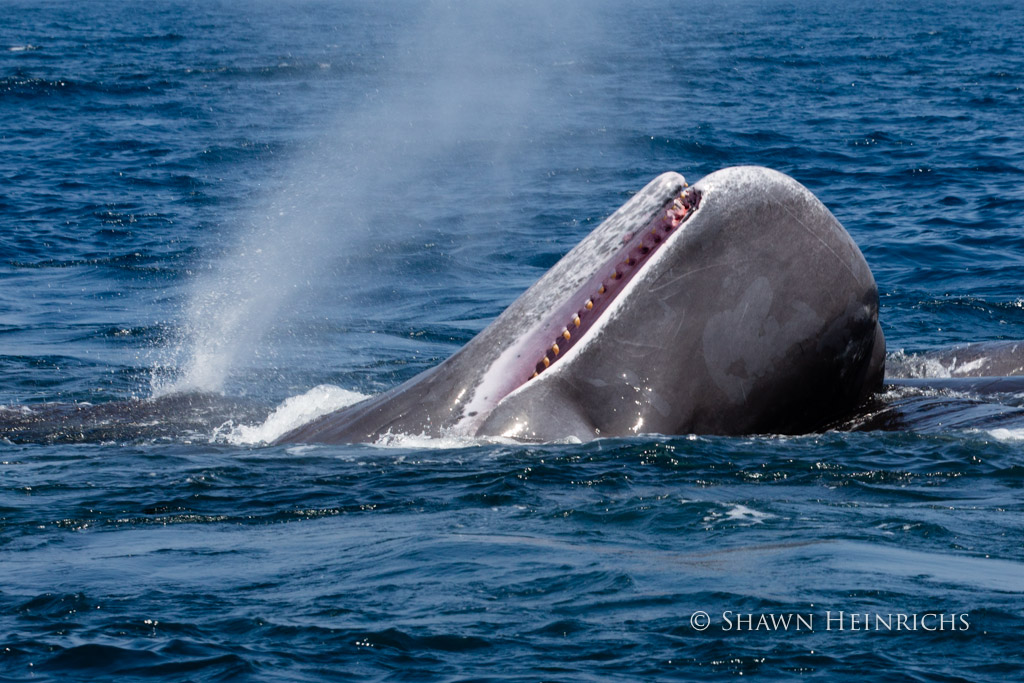 It is unclear as to wether the Orcas succeeded in their attack. We observed the family of Sperm Whales regroup and charge eastward as the Orcas briefly gave chase then peeled off. And then it was all over. For me, this was without a doubt the most incredible encounter I had ever experienced in the oceans and something I will never forget! 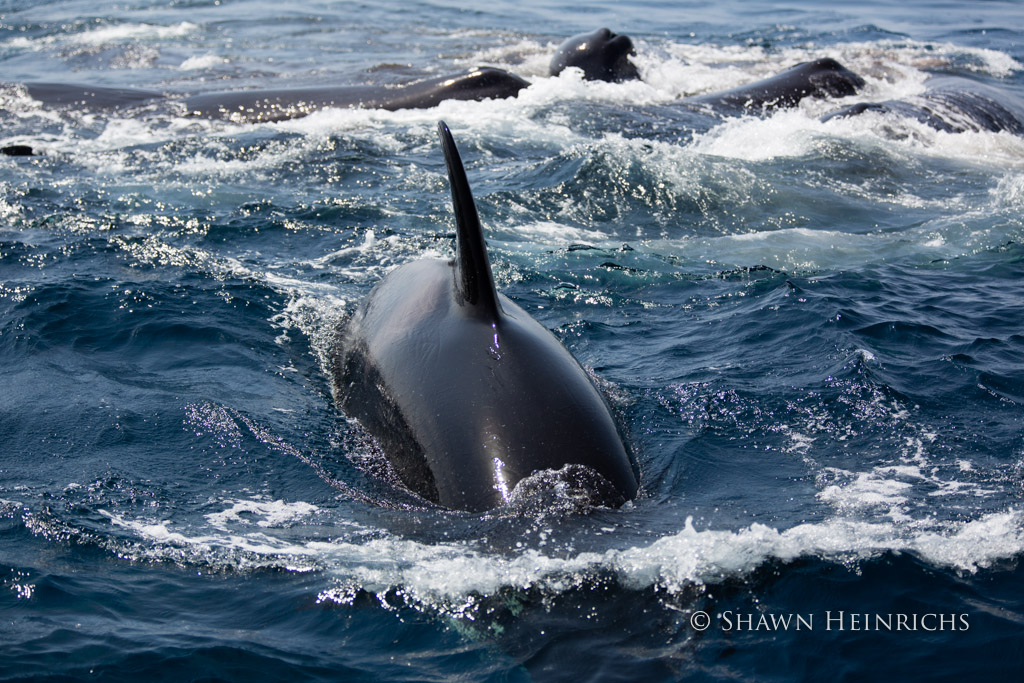 9 Responses to “Orcas vs Sperm Whales”