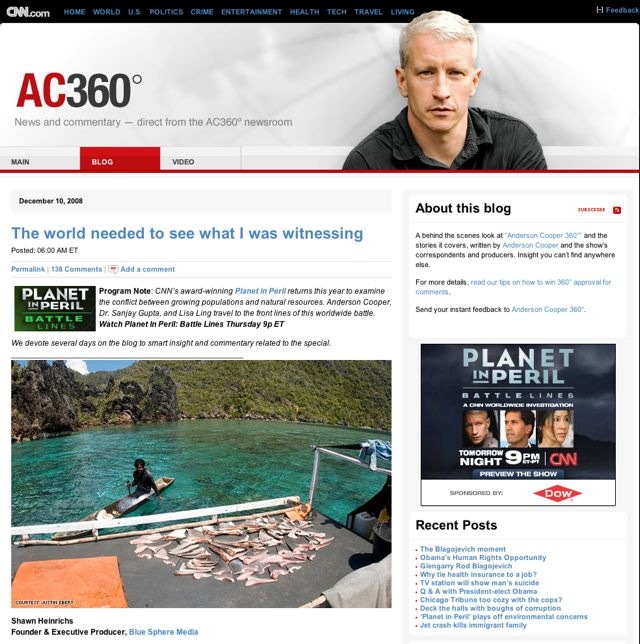 We devote several days on the blog to smart insight and commentary related to the special.

The world needed to see what I witnessing

I broke the surface having just completed the last day of diving on some of the most incredible reefs I had ever seen. Floating in the deep blue waters, I looked around and surveyed the dozens of forest covered limestone islands that surrounded me.

This was truly one of the most beautiful places on earth. I was filming the reefs in Raja Ampat off the western tip of Papua in Indonesia, one of the most remote and biologically diverse marine ecosystems on the planet.

Cruising back to our camp, we noticed a small fishing boat anchored in a shallow lagoon within the protected area. Curious, we decided to investigate. As we drew near, we made a grizzly discovery. On the blood soaked deck, covered with buzzing flies, were dozens and dozens of shark fins that had recently been sliced off of small reef sharks.

Looking into the water, an odd shape at the bottom caught our attention. Immediately we identified it as the body of a shark. It took all my willpower to control my feelings of anger and frustration. And then I recalled, where sharks should have been abundant on every protected reef, we had not seen sharks the entire week. Now it was clear why. It was also immediately clear what I had to do.

The world needed to see what I was witnessing.

Flipping my video camera on, I documented the gruesome reality of what lay strewn before me: the fins, the blood, the flies, grisly contradictions to these magnificent surroundings.

Loading my camera into my underwater housing, I threw on my snorkel gear and slipped into the water. Below me strewn across coral reef were a dozen, dead juvenile reef sharks rolling gently with the current. Descending down, my stomach turned as I saw the blood seeping from wounds where their fins had been. These beautiful sharks had been ruthlessly sliced and thrown overboard to drown, killed just for their fins.

After filming all I could stomach, I returned to the boat. Enraged, I wanted to do something. Certainly this reckless harvesting must be illegal. Our guide Andy then informed me that the fisherman had presented a legal shark fishing permit which for $30 granted him the right to fin sharks for 30 days. Quick math revealed 10 sharks per day times 30 days, or 300 sharks for $30.

This was the price for the life of each of the juvenile reef sharks below me on the reef. But what was the cost on the marine ecosystem and the local community that depended on it?

Something changed in me that day, something that would grow inside and drive me to dedicate my life to ending the short-sighted destruction of marine environments and first and foremost, by halting the shark fin trade.

So much of what I have learned about the oceans, I have learned while diving and filming. Much of what we watch, read and hear about marine life is only a shadow of the reality. For many people, the closest they come to this world is a seafood restaurant or sushi bar.

Take sharks for instance, one of my favorite subjects. We are taught to believe sharks are mindless killers, that even a drop of blood will send them into a feeding frenzy and that most species of sharks are “man-eaters”.

These myths couldn’t be farther from the truth. I have drifted with schools of over 500 hammerhead sharks and watched as 100 reef sharks formed hunting packs at night. I have knelt within touching distance while a dozen bull sharks, some more than 1000 pounds and 11-feet long, fed on fish. In all my dives with sharks, I never witnessed a deliberate attempt by a shark to injure or kill.

Sadly, however, I have also watched sharks disappear from the oceans. Sharks were once plentiful, but they have effectively vanished from all but a few remaining sanctuaries. And even within these “sanctuaries” they are being systematically targeted and killed for their fins. Fins!

Fins make up less than 3-5 percent of a sharks’ total mass, the other 95 percent is either thrown back in the ocean or used as a cheap by-product. Only small strands of cartilage from the fin are used, the rest discarded as trash. These cartilage strands are boiled and used as a flavorless thickener, like thin noodles, in a watery soup flavored by chicken stock. Shark Fin Soup.

Once popular on special occasions among the ultra-elite in Asia, the recent economic boom in China coupled with intense marketing by the shark fin trade, has fueled an explosion in demand for the soup.

More than 100 million sharks are killed every year primarily for their fins. In the past 20 years, many of the great shark species populations have been reduced by more than 90 percent. If nothing changes, sharks are heading on a one way road to extinction.

So what if we remove sharks? Slow to grow and slow to reproduce, sharks have perfectly evolved for 400 million years to keep our oceans in balance by removing the sick and managing populations. Remove the sharks and the populations of faster growing predatory fish they control explode and wipe out successive layers in the food chain.

The ecosystem has been in place for more than 400 million years, but man is wiping it out in less than 50 years. Close to 1 billion people depend upon the ocean for their livelihoods and survival. What will happen when these people lose their jobs or go hungry? That is why sharks matter.

In the developed world, our consumption behavior is disconnected from its impact on the environment. Most of us don’t know where our fish comes from, how it is caught or raised, and what waste products it produces. The oceans are being effectively strip-mined, by some of the most destructive and wasteful fishing practices imaginable.

The result: sharks along with all other large species of fish have been largely fished out of most of the seas with hardly any notice or public outcry. And now, we are fishing our way down, removing successive layers in the food chain.

As part of my documentary I am filming on the global shark fin trade, I spent a week in Raja Ampat. This region was once one of the most ecologically diverse and pristine marine ecosystems left on earth. Just a few years ago long-line fishermen were pulling out a dozen or so 1.5 meter long reef sharks in a single day, but now they catch almost nothing except a handful of baby sharks each week.

Most of the shark fishermen have moved on to find new shark fishing grounds. The shark fishermen that remain now use miles of bottom drift nets instead of lines. These nets scrape off the coral reefs and catch everything in their path including baby sharks, reef fish, turtles, rays and manta rays. The situation has clearly hit rock bottom for sharks and the outlook for the rest of the ecosystem is not good.

After a week of documenting desperate fishermen plunder their dwindling resources, I spent the latter part of my visit filming in the Marine Protected Area surrounding Misool Eco Resort, where I had originally encountered shark finning.

A few years ago, I saw no sharks in this region, but now I observed young reef sharks patrolling the walls and reefs. And a dozen juvenile black tip reef sharks were hunting in the shallows. The local villages that once fished these waters were now employed at the resort and as rangers. They were partners in the protection of their reefs. Their jobs and the entire marine protected area were funded through dive eco-tourism. A far more sustainable way to profit from the oceans.

The unique combination of marine protection, community involvement and sustainable tourism can turn the tide on a seemingly impossible situation, a beacon of hope for our oceans in peril.

Even in a short period of time, the transformation can be significant. And the more people that consciously choose to become part of the solution, the more global the impact.

Editor’s Note: Shawn is a scuba diver, cinematographer, and marine conservationist, working to protect the environment. As an independent filmmaker and founder of Blue Sphere Media, a production company specializing in underwater and adventure films, he has a unique opportunity to influence our collective mind set and globally fuel the ‘blue movement.’ His award-winning work has been featured in broadcast, promotional and conservation productions around the world. In addition, he is a published conservation photo journalist.

___________________________
UPDATE FROM SHAWN: A lot of people have been asking me how they can learn more and get involved. Here are some organizations that I am am working with today, each focusing on a unique aspect of the shark finning issue:

Get involved and make a difference!