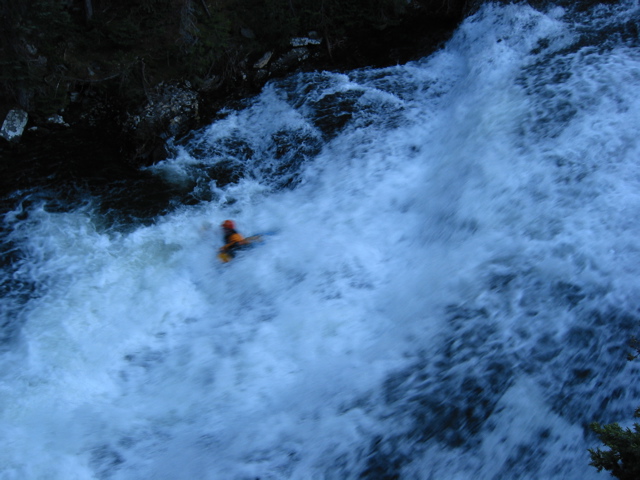 This was probably the most challenging shoot I have done. I was hired by Warren Miller Entertainment (the ski film guys) to shoot white water rafting in the raft, out of the raft, under the raft, over the side, etc. In addition to underwater video, I am an experienced white water kayaker…so perhaps I had the right skill set. They wanted unique footage showing the intensity of action, the raging water, the water pounding into the raft, folks falling out, etc. In addition, they wanted stable footage (not vibration or little shake, only big motion), no droplets, no fog, good contrast etc. All of this in class IV and IV+ river running at 10,000 cfs in their smallest raft (10 footer).

Well my FX1 set up was too much of beast to handle in the raft so we rented an a1 set up from gates with a wide lens from fathoms. the set up was decent but all manual (i have been using electronic for years now). That being said, it held up. one of the best decisions was getting the external monitor…saved my face from serious abuse and allowed me to frame shots while stabilizing the housing with my body.

The challenges were so many it is hard to name but here are a few:

-sun changing to overcast to rain

-no control over any environment or position

My biggest challenge was drops on the lens follow but fogging. The fogging issue was always unavoidable at the beginning of the day. Day 1, the warm housing hit the cold water and everything fogged for 2 minutes. Once the housing hit a mid temp, all was good. day two i tried pre-cooling the housing in the river. Well, it was humid and the housing just misted up on the outside b/c it was too cold! so, I determined that dunking over and over got it to the right time.

The droplets issue was incredibly hard. I tried Rainex…no good. I brought a shammy…no good. I brought lens cleaner no good. Finally I settled on good old fashion saliva….and lots of it! I had to spit on the lens every 1 min, lather it and dunk once to form a clear layer of liquid on the surface. The treatment would last less than a minute, however it ultimately enabled me to get some good clear shots.

The shooting was wild. leaning over the side in shooting at water level, tucked in the back shooting down the line, huddled in the front shooting the folks paddling and leaning off the front of the raft as 2-3 meter waves crashed over me. The biggest thrill was when the raft hit a huge wave as it crested, went vertical and then threw us out, with me catapulted from the top at the front. All this while the camera was rolling. First massive wave lurking, then crashing over, then water, then sky, then upside down horizon, then froth and bubbles, then surface, culminating with the cam climbing back in the raft…now that is unique stuff.

Safety was a big concern. Aside from almost losing my front teeth several times from a metal housing crashing into me, drowning was a primary concern. To address this I taped life vest foam to the housing. The leash was a bigger concern. No leash, lost housing, leash and maybe underwater entrapment and death. I settled on using my dive lanyard with a quick release plastic buckle that was very accessible and would break under force…seemed like a good compromise.

All said and done, mission was accomplished and some of the footage was surprisingly usable! So, if anyone needs tips for shooting in raging waters with a housing, drop me a note…I have plenty of training now:)