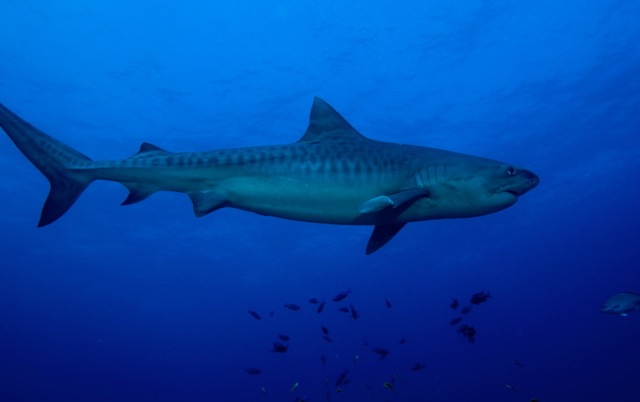 Ever since I had seen the stunning images of the great hammerhead in close proximity with divers in an issue of the UK magazine “Dive”, I knew I would have to take this trip.

Jim Abernethy runs what is perhaps the most unique and “real” shark diving expedition in the world. Nowhere else in the world do you spend the majority of your day underwater with some of the oceans largest predators with no cage, no chain mail, in fact nothing but a skinning pvc rod between you and these huge sharks, all in the incredibly blue waters of the Bahamas. On several occasions, we had great hammerheads, tiger sharks and bull sharks jostling for position to get a chance at the bait.

Jim’s promises nothing on his trips as nature ultimately decides what will be served up on a given day. That being said, Jim delivers like no other. I can only count one dive where we were not in the water with large predatory sharks. Tigers were the most frequent, followed by lemons, great hammerheads and bull sharks. Caribbean reef sharks were present on many dives but we considered these little sharks as merely pests getting in the way of the big boys. Most other places in the world are delighted by a reef shark.

Over the course of the trip, our comfort level in the water certainly increased as our emotions transformed from fear to respect for these great creatures. That being said, not once underwater did I underestimate these predators…especially the tiger sharks. Second to the great white, these sharks are the largest and most powerful sharks in the ocean. In an instant, they could turn me into a meal. It is astounding that the decide otherwise. It was this fact that left the greatest impression on me.

We fear these great tigers and the world celebrates the fishermen who capture and kill them. We have virtually wiped them out of existence in most of our oceans. Yet when I entered their realm, completely unprotected and exposed, they investigated me with curiosity but did me no harm. These are creatures to be appreciated and predators to respected…these are Jim’s tigers.