So read the headline on Yahoo’s homepage after the story went viral about our revolutionary fashion shoot with whale sharks! 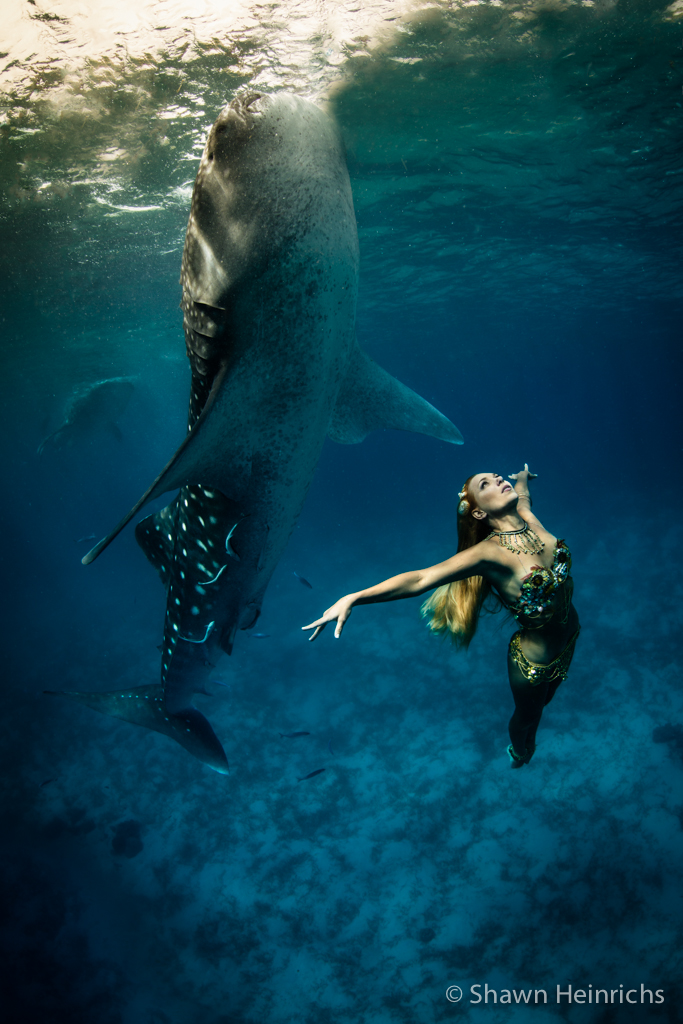 This November I teamed up with fashion/wildlife photographer Kristian Schmidt  to redefine how the world views threatened marine species. I first met Kristian on a whale shark trip with our friend and ally Richard Branson and conservation organization WildAid (an NGO focused in reducing demand for endangered species), and we were immediately captivated by each others work. Recognizing that people only protect what they care about, we hatched a plan that would combine my underwater and marine life photography expertise with Kristian’s mastery of creative fashion photography. 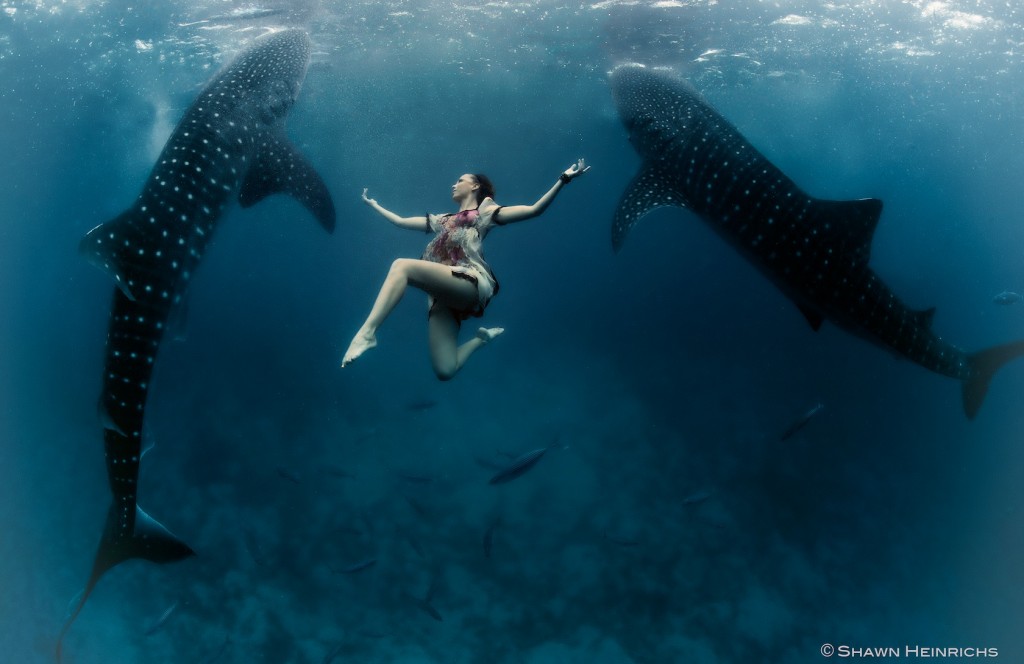 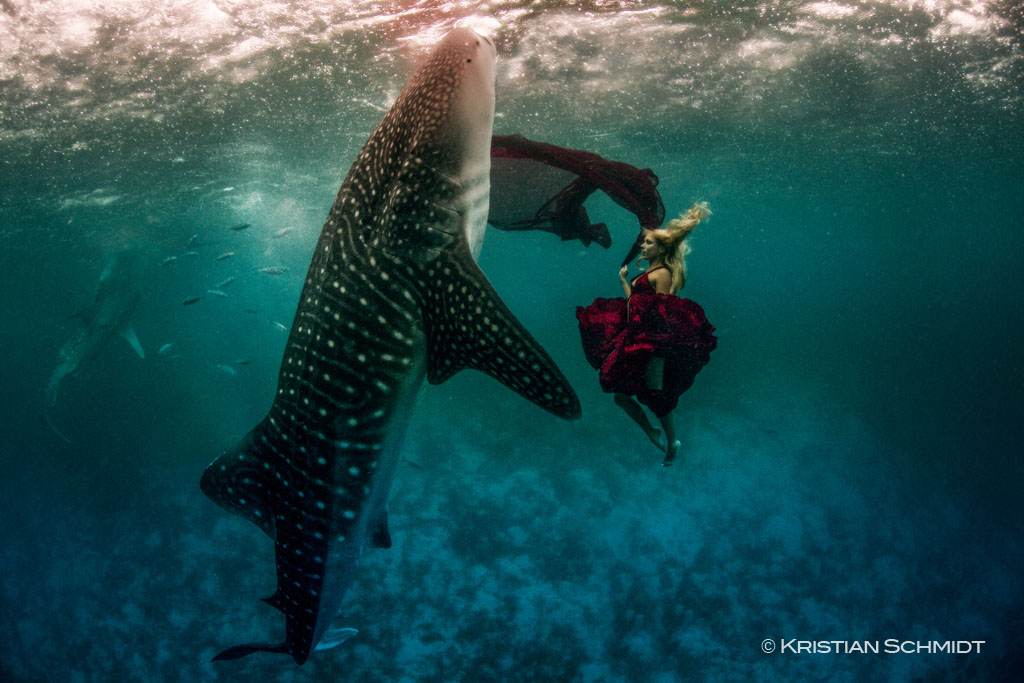 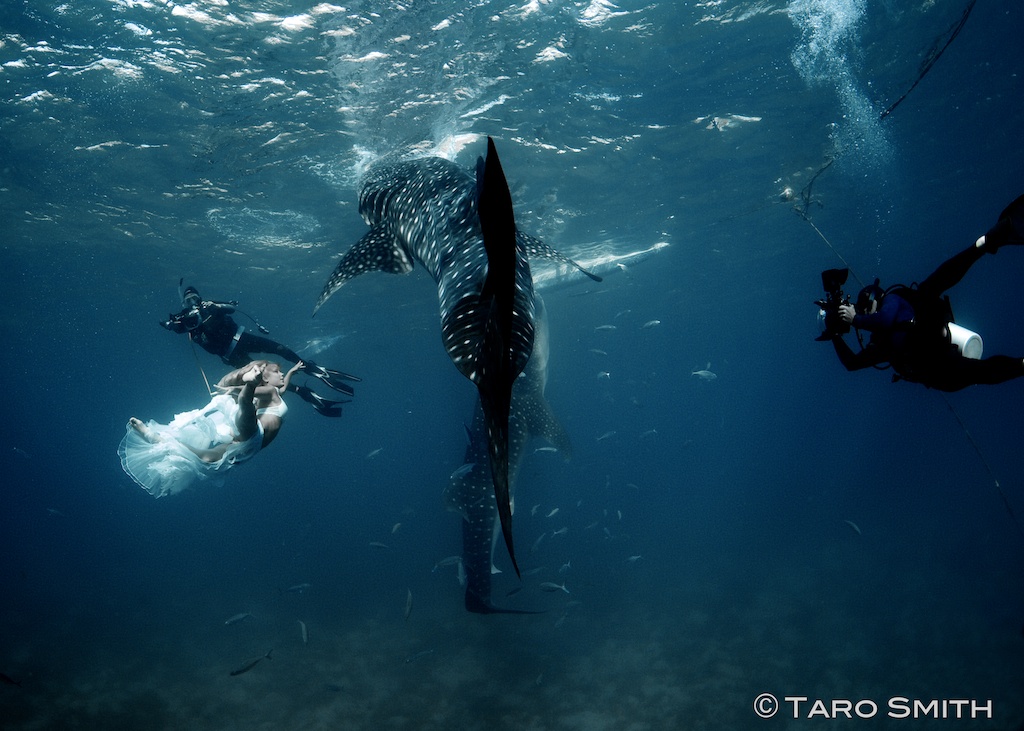 We assembled a team composed of stunning models, a stylist and a dive specialist. Joining Kristian and I were team members including: Italian model Roberta Mancino (world sky diving champion and one of the world’s foremost wing-suit base jumpers), model Hannah Fraser (professional underwater model and real-life mermaid), Fazli Krasniqi (professional stylist) and Taro Smith (physiologist and artists). 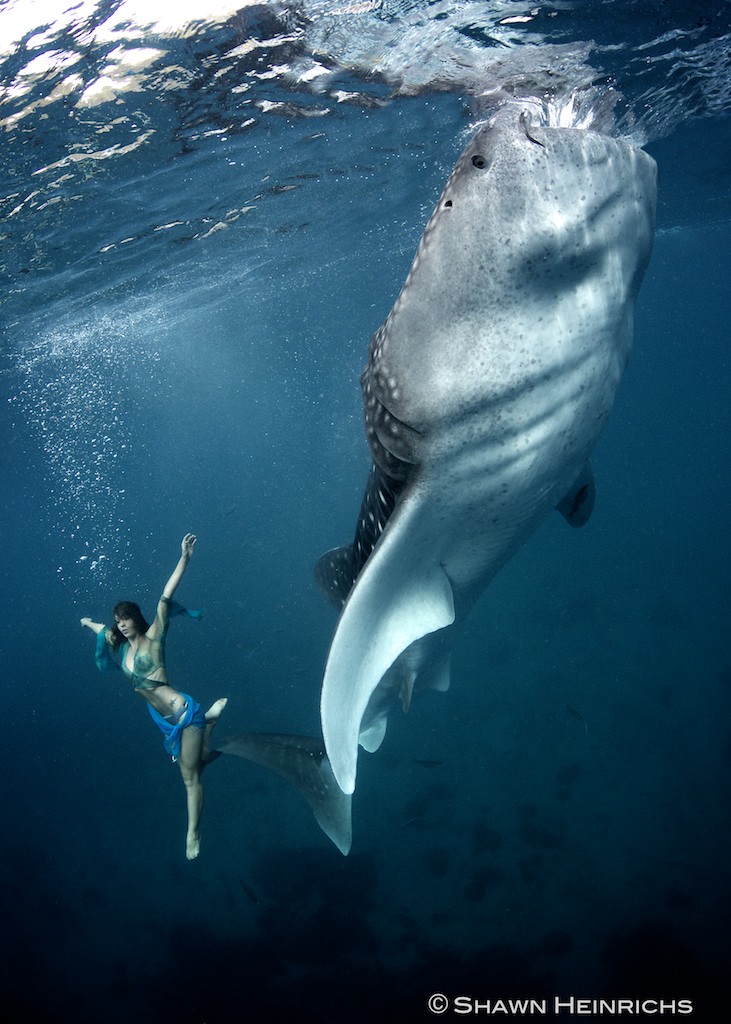 Base jumper Roberta Mancino leaps over a gulping Whale Shark 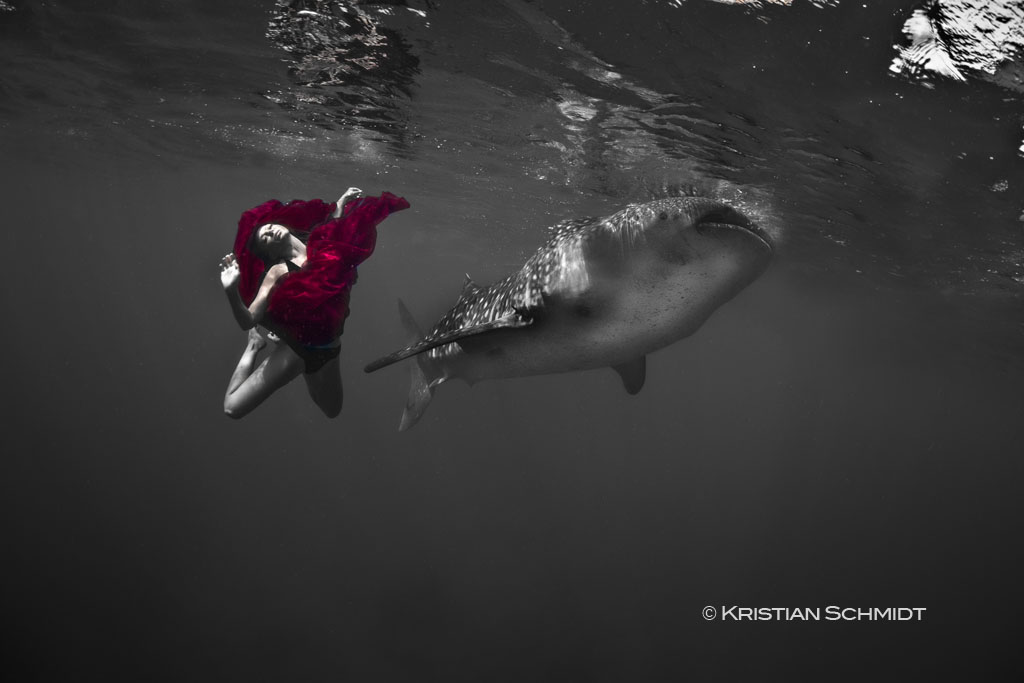 Roberta Mancino in a dramatic pose beside a gentle Whale Shark

Fast forward 4 months and the team found ourselves in a remote corner of the Philippines in the small village of Oslob. One year earlier I had released to the world the first ever images capturing the incredible relationship between these fishermen and whale sharks, where the fishermen had befriended whale sharks by hand feeding them scoops of tiny shrimp.

Just a two years ago in these very waters, divers discovered a live juvenile whale shark that had all its fins cut off. Though legally protected in the Philippines, poaching of whale sharks had continued because the shark fin traders enticed poor local fishermen to earn money from exploiting these vulnerable animals. Less than a decade prior, the local populations of whale sharks had been all but wiped out to satisfy demand for shark fins in China. Now finally, local communities have found a way to earn a living from whale shark tourism, and rather than targeting and killing them, they now are passionate about protecting them. 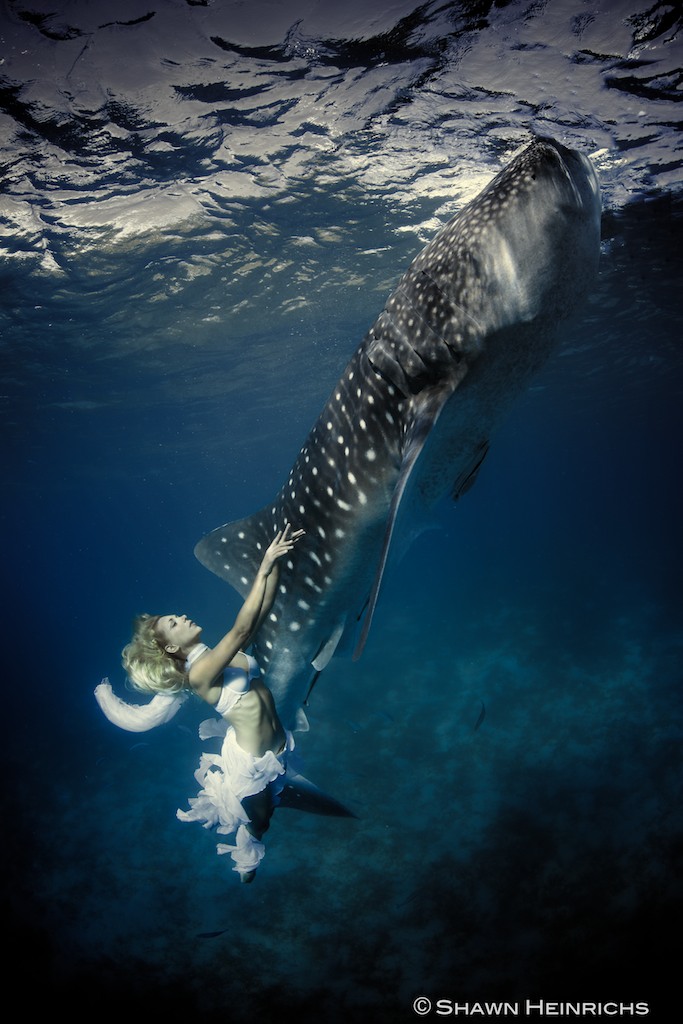 Hannah Fraser gracefully floats next to a magnificent Whale Shark

One year following my initial visit, our team returned to Oslob to highlight the magnificence of these creatures and bring their beauty to a global audience. Our challenge, to turn models into mermaids and create mesmerizing imagery that captured the unique connection between humans and largestest fish in the ocean, the whale shark. After a week of intense shooting, overcoming the elements, technical obstacle and fatigue, the team returned home with some of the most innovative and inspiring marine life interaction imagery ever captured. 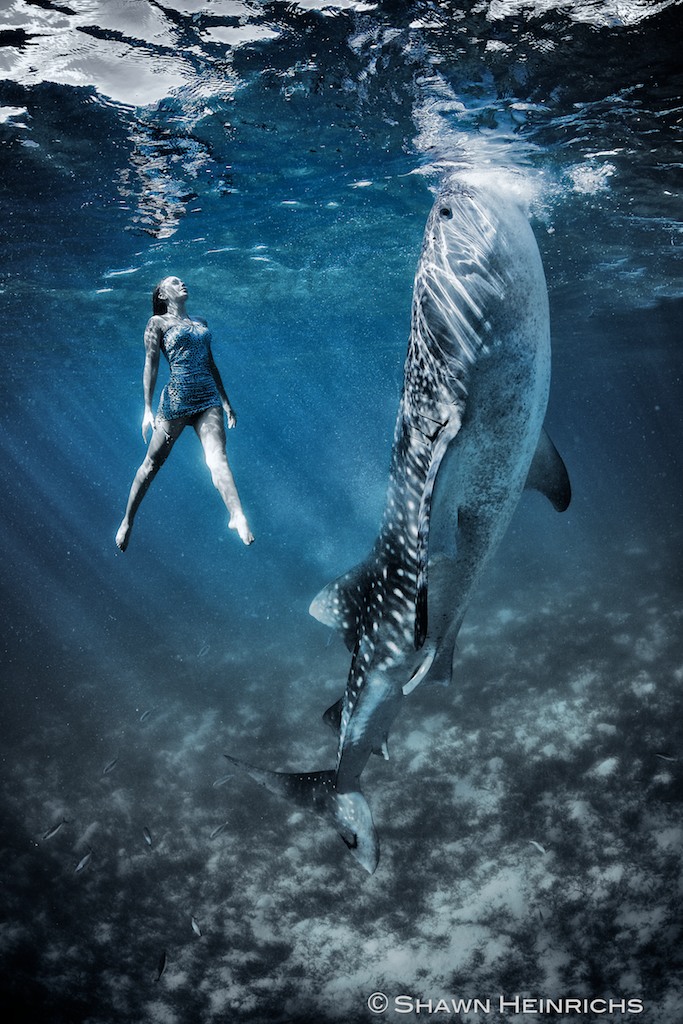 Roberta Mancino rises to the surface beside a still Whale Shark

We are preparing a limited run of exclusive prints to be sold to discerning photography/art collectors. These prints are now available HERE or  click the following link to browse the print selection.

In early December, just weeks after our visit to Oslob in southern Cebu, Philippines,  the region was struck by a massive Typhoon that flooded villages, destroyed houses and killed people. This is a tragic situation and these communities are struggling to rebuild. Fortunately the Oslob community has developed a strong whale shark tourism industry that can now play an pivotal role in helping them get back on their feet. Though some conservation organizations are vocally outspoken in opposition to Oslob’s whale shark tourism, we must not overlook how important it is to the welfare of this community and now in its ability to help them recover.